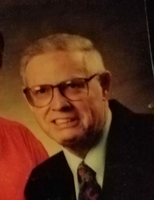 Laurence M. May, 90, of Avenel, passed away Tuesday, March 5, 2019 at his home. Mr. May was born in Plainfield to the late Harry and Avis (Whiting) May and had resided in Avenel for the last sixty-three years. He was employed as a parts manager by General Motors in Elizabeth for forty years before retiring in 1991. Mr. May was an avid model railroader. He was predeceased by his beloved wife, Julia Gernert May on January 7, 2018, and also by his brother Frank, his sister Kathlyn, and his grandson Dennis May. Laurence is survived by his three sons: Laurence H. May of Berkeley Heights, Richard May and wife Linda of Jonesboro, AR and Frank May and wife Susan of Eddy, TX, his five daughters: Linda Jackson of Berlin, NH, Joann DaSilva and husband Eduardo of Avenel, Janet Sonnenberg and husband Thomas of Avenel, Laura Bernard of Avenel, and Cindy May of Easton, PA, twenty-three grandchildren, forty-four great grandchildren and six great great grandchildren. Funeral services will be held Friday 10 am at the Mitruska Funeral Home, 531 New Brunswick Ave. Fords. Interment will follow in the Cloverleaf Memorial Park Cemetery in Woodbridge. Visitation hours will be held Thursday from 6 to 8 pm. In lieu of flowers, memorial donations may be made to the Woodbridge Animal Shelter, 2 George Frederick Plaza, Woodbridge, NJ 07095.