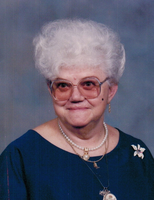 Yolanda ''Jeannie'' Talbott, 87, passed away Thursday, January 16, 2020 at the Anchor Care & Rehabilitation Center in Hazlet. She was born and raised in Perth Amboy before becoming longtime resident of Fords. Jeannie was a devoted mother and homemaker. She loved cooking and sewing, everyone she knew was gifted one of her creations. She was "Mom" to many and she always made sure everyone was cared for and happy. She was a member of the Magyar Reformed Church in Perth Amboy, where she belonged to the Women's Guild, the Fellowship Circle and was the coordinator of the Seniors Group, running monthly outings and get togethers. She was predeceased by her first husband John Pirigyi in 1998 and by her second husband Howard Talbott in 1980, also by her daughter Brenda Greene in 1998, her son John Pirigyi in 2016, her son Edward Pirigyi in 2015 and her grandson Tommy Greene in 2005. Surviving are her two sons James Pirigyi of Hazlet and Howard Pirigyi of Winston, GA, two daughters Linda Lovasz of Loma, CO and Lisa Washington of Avenel, ten grandchildren and four great grandchildren. Funeral service will be held Monday 9:30 am at the Mitruska Funeral Home, 531 New Brunswick Ave in Fords. Followed by a 10 am service in the Magyar Reformed Church in Perth Amboy. Interment will follow in the Calvary Cemetery in Hopelawn. Visitation hours will be held Sunday from 4-8 pm. A Christian Wake service will be held Sunday evening at 7:30 pm at the funeral home.