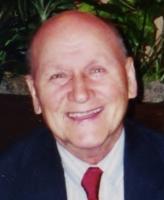 Michael Charles Paull, Jr., 89, of Metuchen, passed away Wednesday, July 6, 2016 at his home. Mr. Paull was born in Woodbridge to the late Michael Sr. and Julia (Muszka) Paull and had previously lived in Perth Amboy before moving to Metuchen fifty four years ago. Michael, as well as his wife Margaret, were both graduates of Perth Amboy High School. He in 1944 and Margaret in 1950. Mr. Paull was a very proud US Army Veteran of WW II. He was a general contractor with Michael Paull & Son General Contractors in Metuchen for thirty seven years before retiring in 1989. He was a devoted parishioner of St. Michael's Hungarian Catholic Byzantine Church in Perth Amboy and a Charter Member of the Holy Name Society. He will always be remembered for the many functions that he was chairman of including dinner dances, the very popular Venison Dinner and the many years of basketball at the St. Michael's Auditorium. A long time member of the St. George Fraternal Insurance Society, Michael was selected to be on the board of directors upon the merging with the Hungarian Reformed Federation. He held that position for many years. During his directorship he sponsored many years of picnics in Matawan, calling them Mariapocs Fraternal Day, an event that brought people of many faiths together. He was also chairman of the Audit and Examining Committee in Washington, DC and was on the building committee for the new Bethlen Home Nursing Home in Ligonier, PA. Michael was a very loyal Rutgers and Yankee fan. He enjoyed travelling by car with his wife and took two cross country trips visiting most of the National Parks and many famous baseball fields. He was a longtime coach for the Metuchen Little League and committee chairman of the Boy Scouts of America Troop 70 Michael was a graduate of the Academy of Aeronautics at LaGuardia Airport and also past president of the Metuchen Rotary. He was a Third Degree member of the Knights of Columbus of Perth Amboy. He was predeceased by his sister Mary Paull Hack. Surviving are his loving wife of sixty five years, Margaret (Hudak) Paull, his two sons: Dr. Robert Paull and wife Marian of Edison, and Richard Thomas Paull and wife Dawn also of Edison, his two daughters: Kathleen Melanson and husband Lawrence of Metuchen, and Deborah Paull Alexander of Edison, his ten grandchildren Laura Melanson Masterson of Metuchen. Kellie Melanson Minaeff of Washington, NJ, Lisa Melanson Bodner of North Plainfield, Kimberly Paull of North Kingston, RI, Erica Paull Pryblo of Medford, MA, Nicole Alexander of Concord, CA, Phillip Michael Alexander of Concord, CA, Elizabeth Alexander of Concord, CA, USMC Lance Corporal Richard Michael Paull of Washington, D.C. and Megan Paull. He is also survived by five great grandchildren: Ethan Masterson of Metuchen, Michael and Nicholas Minaeff of Washington, NJ and Hunter and Ramsey Bodner of North Plainfield, a niece Elaine Convery and husband Samuel,a nephew Emery Hack Jr. and wife linda The family is also expecting twin great grandchildren in early August. HE WAS A KIND AND CARING HUSBAND, FATHER, GRANDFATHER AND GREAT GRANDFATHER WHO WILL BE DEARLY MISSED BY ALL WHO LOVED HIM. Funeral services will be held Monday 10:00 am at the Mitruska Funeral Home, Inc., 531 New Brunswick Ave., Fords. Followed by a 10:30 am Service of Divine Liturgy in the St. Michael's Hungarian Byzantine Catholic Church in Perth Amboy. Interment will follow in the St. Michael's Cemetery in Fords. Visitation hours will be held Sunday from 4 to 8 pm. Memorial donations may be made to St. Michael's Church , PO Box 1297, Perth Amboy, NJ 08861, the Alzheimer's Association, Greater New Jersey Chapter, 400 Morris Avenue, Suite 251, Denville, NJ 07834-1365 or to the charity of one's choice.