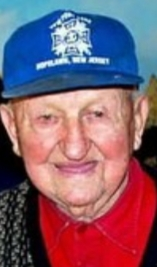 Please share a memory of George to include in a keepsake book for family and friends.
View Tribute Book
George ''Tracy'' Kacsur, 98, of Hopelawn, passed away Saturday, March 14, 2020 at the JFK Haven Hospice in Edison. Mr. Kacsur was born in Bittner, PA to the late Michael and Bertha Kacsur and had lived all of his life in Hopelawn.. Mr. Kacsur was a US Navy Veteran of World War II and Korea. He was a longtime member and past commander of the Hopelawn V.F.W. Post 1352. Mr. Kacsur was also past Middlesex County Commander and past District 8 Commander. He was a mason by trade and owned and operated George Kacsur Mason Contractors of Hopelawn. He was a member of Bricklayers Union of Elizabeth. Mr. Kacsur was predeceased by his beloved wife Bertha in 1991 and also by a brother and two sisters. Surviving are his two daughters: Marilyn Fetcishin and husband Jeffrey of Fords , and Janet Stankovitz and husband Gerald of Howell, his brother: Albert Kacsur of Scotch Plains, his sister: Helen Simkovich of Edison, three grandchildren : Tammi, Carrie and Eric, two great grandchildren Ashli and Corrine and many nieces and nephews. Funeral services will be held Friday 10:00 am at the Mitruska Funeral Home, Inc., 531 New Brunswick Ave., Fords. Interment will follow in the St. James Cemetery in Hopelawn. Visitation hours will be held Thursday from 4 - 8 pm. Memorial donations may be made to the Menlo Park Veterans Memorial Home, 132 Evergreen Road, PO Box 3013, Edison, NJ 08818
Thursday
19
March