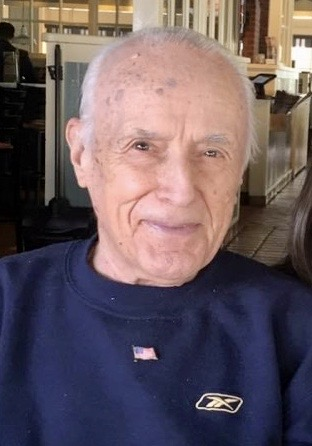 Please share a memory of Emil to include in a keepsake book for family and friends.
View Tribute Book
Emil J. Petrick Sr., 99, of Milford, PA passed away Saturday, September 12, 2020 at the Highland Rehab and Nursing Center in Middletown, NY. Emil was born in Passaic, NJ to the late Joseph and Anna Petrick. He had previously lived in Fords for over seventy years with his beloved wife before moving to Milford. Emil was an US Army veteran of World War II where he served for three and a half years. He was a Sergeant squad leader with Company B of the 115th Infantry/29th Division. Emil was a devoted husband, father and grandfather. After marrying Josephine, the love of his life, the two moved to Fords where they raised their three children. Emil worked for the Great Atlantic & Pacific Tea Company for forty years. He later worked at the Middlesex County College in Edison where he retired from, after ten years. Emil was a longtime member of the Our Lady of Peace Church in Fords and a member of the Holy Name Society of the church. He was also a member of the Our Lady of Peace Seniors and the Holy Spirit Seniors. He was predeceased by his wife of seventy-three years, Josephine; his son, Emil Petrick Jr.; daughter-in-law, Ellen Tanner; and sister, Josephine Farrell. Surviving are his son, Mark Petrick; daughter, Diana Stromberg and her husband Ray; daughter-in-law, Kathleen Petrick and seven grandchildren: Joseph, Dennis, Kevin, Mary, Kim, Chris and Kyle. Emil will forever be remembered for his love of gardening. He took great pride in his homegrown flowers and vegetables, especially his tomatoes. He was a great cook, who for decades, was the only person gifted enough to hold the job of carving the Thanksgiving turkey. Among so many other gifts and talents, Emil was also an artist. He most enjoyed surrounding himself with music of the Big Band era and reminiscing of good times with friends and family by his side. Family and friends are invited to attend his funeral mass which will be held Thursday, September 17, 2020 at the Our Lady of Peace Church in Fords. Interment will follow in the Holy Trinity Cemetery in Hopelawn. Arrangements are under the direction of the Mitruska Funeral Home, 531 New Brunswick Ave. Fords. In lieu of flowers, memorial donations may be made to the Wounded Warriors Foundation.
Thursday
17
September