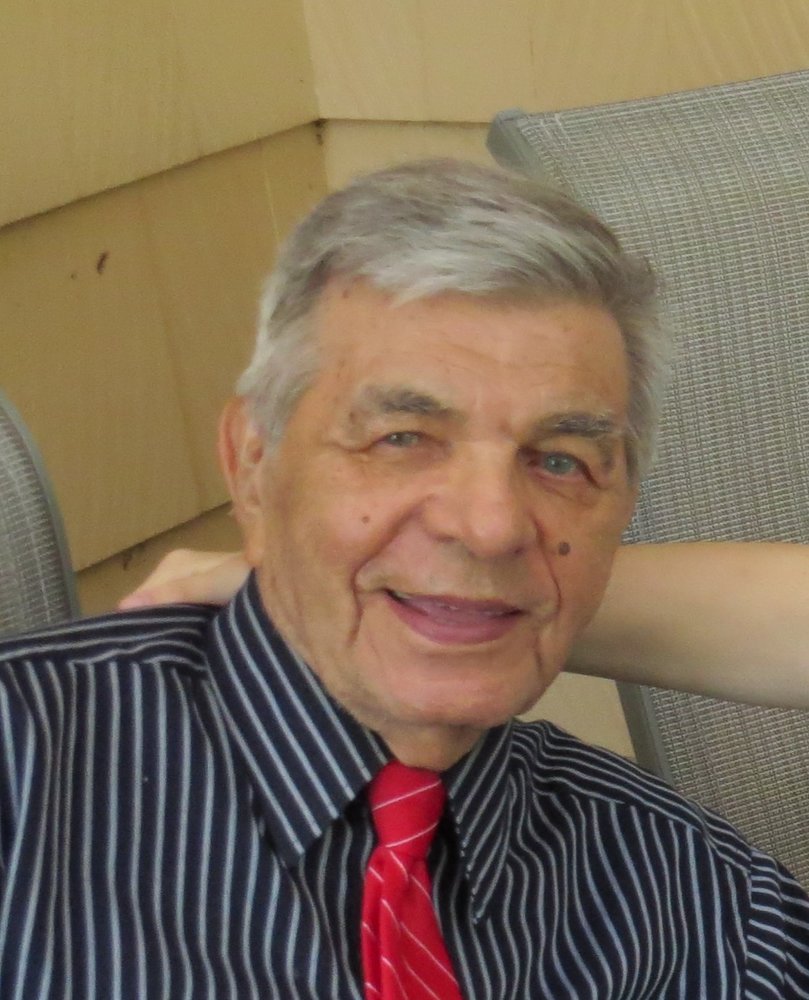 Please share a memory of Walter to include in a keepsake book for family and friends.
View Tribute Book
Walter L. Szelc, 96, of Hopelawn , passed away Thursday, March 11, 2021 at the Overlook Hospital in Summit. Mr. Szelc was born in Perth Amboy and lived in Perth Amboy initially and later the Hopelawn section of Woodbridge Township. After graduating Perth Amboy High School in 1942 he tried enlisting in the US Marine Corps, but being underage, his father wouldn't sign permission papers, stating, "I already have three sons in the military, I don't need a fourth!" Mr. Szelc then joined the US Merchant Marine service. After six months on convoy duty, he returned home on shore leave and went to the draft board, now being over eighteen, requested to join the USMC, which was granted. At boot camp his drill instructor famously said to him, "Szelc! What is the matter with you? Nothing I say or do fazes you! Are you even human?" To which Mr. Szelc replied, "Sir! After serving in the Merchant Marines and growing up with my father, nothing fazes me!" The D.I.'s response, "I admire your honesty, now drop and give me fifty!" He served in the Pacific Theater and was slated to be in the final invasion when the war ended. His unit was then stationed in China for relief duty. Mr. Szelc endured the Great Depression as a paper boy, bakery worker, and later Cable Works, doing defense work. After the war he worked at Rheem Manufacturing in Edison as a supervisor. While there he represented his union at the national level and started a pension program (though ironically the company closed before he himself was fully vested in the plan). After a short stint at Alcoa, he joined his two older brothers Frank and Jake in the family moving and storage business started by their father, Known as Szelc Brothers and Avenel Moving & Storage with a franchise with Global Van Lines for interstate moving. Helping to keep the company going for thirty plus years, He once quipped, "Anyone can make money when times are good, it takes a real businessperson to keep things afloat when times are bad." He helped found the Central Jersey Movers Association and attended national conferences for the industry. He was also proud of having been appointed to the Woodbridge Safety Council numerous times by several different mayors in the 1960's and 1970's. Over the years Mr. Szelc was in the right place at the right time for many people. He saved a co-worker from electrocution, saved a friend from drowning, several people from carbon monoxide poisoning, another from bleeding to death and administered CPR to a heart attack victim. After the war he married his sweetheart, Irene (Sobczyk) on September 13, 1947 and had a wonderful seventy three years together. In 1957 he built his own home in Hopelawn. He was a communicant of the Holy Spirit RC Church in Perth Amboy and later the Good Shepherd Parish in Hopelawn. He was a member of the Knights of Columbus and the local Veteran of Foreign Wars chapter. He helped run the local VFW sponsored Boy Scout Troop 57. He was predeceased by his mother Angelina Zywicka and his father Walter J. Szelc; and siblings Felix, Sophie, Helen, Michelina ("Mickey"), Frank, Jacob and Rosalind. He is survived by his beloved wife Irene, his sister Stasia, son Gary, granddaughter Eleanor, daughter-in-law Lynn Brown, many loving nieces and nephews and family friends. In lieu of flowers, the family requests donations to the Marine Corps Scholarship Foundation (909 N.Washington St., Alexandria, VA 22314) or to the Brain Injury Alliance of NJ (825 Georges Rd., 2nd Floor, North Brunswick, NJ 08902) in his memory. Funeral services will be held Thursday March 18, at 10:30 am at the Mitruska Funeral Home, 531 New Brunswick Ave in Fords. Followed by a 11:00 am Mass in the Good Shepherd Parish, Florida Grove Road in Hopelawn. Entombment will follow in the Cloverleaf Memorial Park Cemetery Mausoleum in Woodbridge. Visitation hours will be held Wednesday from 4 to 7 pm.
Wednesday
17
March

Share Your Memory of
Walter
Upload Your Memory View All Memories
Be the first to upload a memory!
Share A Memory
Plant a Tree